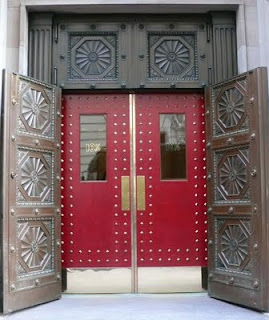 When looking for items of historical interest, the quest will often take you to places you never quite knew existed until your research stumbles upon it in a footnote or reference. These places, often tucked-away behind nondescript doors have been there for many years waiting for you to enter.

The doors represented to the right, are a pair of those very doors. Behind them is a world frozen in time & space - undisturbed by the march of technology or the mayhem of the city around it. Step beyond these doors & you will find yourself back in the 19th. Century.

Who owns these doors you ask ?  Why my dear Mr. Watson, these doors belong to the  Boston Athenaeum. (http://www.bostonathenaeum.org/).

The definition of an Athenaeum is a reading place or Library - a place were people go to pursuit knowledge.

While researching for the South Station project, I often find myself going to places I never knew existed until someone in a articles mentions them in a footnote or as a passing reference. These references are rare gems that one will often stumble upon. Some of these leads do turn-up as dead-ends or worse - extinct.  When you do find a good solid lead you will sometimes be surprised at what was right in front of you the entire time.

This is exactly how I found the Boston Athenaeum.

The biggest problem you face when doing research is often these places have large amounts of historical information are perpetually underfunded & understaffed. You will typically have 1-2 people who have worked there forever & know where everything is located their little realm. The information is typically barely cataloged except inside the curator's head.

The Boston Athenaeum is a little different.  If you go to their website http://www.bostonathenaeum.org/ you will find their collections are well cataloged & well referenced. The online research catalog - Athena,  is very well done with numerous cross-references & options.  I was able to find the data they had on South Station Boston pretty quickly.  The catalog told me they did have information - photographic to be exact, of the construction of South Station. Paydirt!. I have been looking for these photos for almost a year with no luck but the Athenaeum stated they had them. Unfortunately, they did not have any of the photographic collection online when I conducted my research so I had no idea on which pictures they had on-hand & if it was exactly what I was looking for.  Time to make some phone calls.

I called the Boston Athenaeum main number (where else do you start ?). After a few transfers, I found the person I needed to connect with - Catharina Slautterback Curator of prints & photographs. In speaking to Catharina, I explained what I was researching & the exact catalog number for reference from their own catalog. In speaking to Catharina , I quickly learned that one does not simply walk into the Boston Athenaeum. I would need to make an appointment well in advance so that a curator would be on-hand to assist me with the material I request.

After making the appointment, I did ask if it were possible to make copies of the material for my own use. Here's where things get tough fellow researchers. Often times, archives charge a pretty hefty fee for duplicates - especially to non-members as a way to continue supporting the archives. My problem is that I am not doing the research for a book or publication but for my own personal use. There is no way for me to recoup the charges if I have to pay for the material - it comes out of my pocket in one direction only. Sometimes when you are on a tight budget, these kinds of choices are hard to make.

On August 19th, 2011, I took the train in to Boston for my appointment @ 10:00am with the Boston Athenaeum. It was a typical warm muggy day in New England - perfect weather to spend a day poking inside a Library. Claudette, my fiance, took the day off to come with me. Since she has little interest in trains & railroading (Blasphemy!) her plan was to spend part of the day @ the Museum of Fine Arts while I am spelunking in the 19th. Century. When I was finished with my research, we would rendezvous for a fine afternoon walking around Boston & Lunch.

After a short walk, I found the red doors you see in the photo above - address: 10 1/2 Beacon Street.

I know these doors. What I did know is that they belonged to the Boston Athenaeum.

When I worked in Downtown Boston I often passed by these very doors - sometimes twice per day. I always thought they were kind of cool but never once did I ever consider actually walking through them to find out what was inside. To me, they looked like some entrance to a very exclusive & very private club for the well-to-do. Since the location of these doors is @ 10 1/2 Beacon Street Boston, this is not such a far-fetched idea. Beacon Hill is a very wealthy section of downtown Boston. It is the home lair of the Boston Brahmins - An exclusive club of rich Yankees characterized by a highly discreet and inconspicuous lifestyle. Old Money lives on Beacon Hill. Also Occupying Beacon Hill is the State House - the hub of Massachusetts politics. In & around these streets are many doors that look just like the ones at the Boston Athenaeum.

I had no idea that these doors were the entrance to the Boston Athenaeum until August 19th, 2011. The address confirmed that yes, I was at the correct place. For the first time, I was invited to enter the world behind these red doors.

Stepping beyond the doors into the foyer is like stepping through a tunnel in time. Outside the doors is the 21 Century. However, once you step inside the Boston Athenaeum, you are instantly teleported back into 19th. Century New England.  The inside entrance way is Marble, Doric Columns, Dark woods, & hushed voices. The only indication of technology is the security desk you must pass by in order to gain full entrance. At the reception desk, you fill-out some paperwork, & wait for your curator to escort you to the research facilities. Since I arrived 15 minutes early, I was allowed to wander a bit through the 1st floor library room. In here, the woods are painted white & books were stacked on shelves 8 feet high.

A few moments later, Catharina Slautterback arrived, greetings exchanged, and we were off to take a peek at what I requested. I was brought upstairs to the 3rd floor research archives. As we walked through a few rooms, I fully expected to see Nikola Telsa or Jules Verne sitting at a one of the tables browsing the latest  scientific periodicals.

I was seated in a beautiful room that had dark woodwork, glass enclosed bookshelves, & magnificent oak tables. At the next table over, the material I requested was ready for me to view. Catharina excused herself & placed me in the hands of fellow curator Tom Gearty.

The first thing Tom handed me were these beautiful large format photographs of the Hartford Ct. Railroad station. These photographs were taken in 1890s just before the station opened. There were shots of both inside & outside the station with an incredible amount of detail. I wanted to see these photographs because they were labeled in the catalog as Hartford Ct. Railroad Station - Boston & Albany Railroad. I found this odd as the Boston & Albany did not run to Hartford Ct. Visual inspection confirmed that the photos were of the Hartford Railroad Station - New Haven Railroad NOT Boston & Albany. I did inform Tom that these prints needed to have the catalog description changed to be correct.

The next item for my viewing was what I came here for in the first place: Photographs of the Construction of South Station, Boston Mass & facilities. These photographs are Cyanotype photographs - a process used in the late 19th to 20th century to produce low-cost mass-produced photographs.

In this collection are photographs of the South Station Headhouse, Power House, Train shed & other facilities located inside the Boston Engine Terminal limits.

There are a total of 102 Photographs in the collection: Many of these photographs are of the Boston & Albany Railroad Facilities. This was located just west of the Old Colony Facilities & Boston Terminal Yard limits.

The shots of the Boston & Albany yard are of great interest as there is precious little information on this area before it was either moved or demolished.


Also included in the collection are  photos of the former New England Railroad Station, Old Colony Station, The Boston & Providence Station, and the Boston & Albany Station.

Although the collections main focus is on the Boston & Albany Railroad, the collection is a fascinating look into the area before & during the construction of South Station.

When I finished looking at all the photographs, I was introduced to Patricia Boulos - Digital Programs Librarian of the Boston Athenaeum. We discussed the collection in detail & how important the information  would be to fellow researchers & railroad historians. She agreed that the collection should be digitized & made available for viewing on their website.

The photographs can be found in the collection section of the Boston Athenaeum's website. The URL is:
http://cdm.bostonathenaeum.org/cdm/search/collection/p16057coll4


The images (as well as many other items of interest) can be viewed in-person if you choose to do so. However, if you choose to visit the Boston Athenaeum, you cannot simply walk-in off the street & expect to conduct research. You need to call first & make an appointment. I recommend that you call the main number @ 617-227-0270 so they can direct you to the appropriate resources.